Who doesn't love donuts? They just melt in your mouth, but of course, they rarely fit into the MSPI diet. So that means making them myself, but I'm not a big fan of deep-frying. (I got burned once from attempting to make apple fritters in college. I didn't like that and don't want to repeat it!) However, I've been seeing lots of recipes for baked donuts, but those recipes require a special donut pan, which I don't have. I want one! But I don't currently have one. Oh, Santa -- a.k.a. my hubby (we'll see if he reads this post!) -- wouldn't this be lovely under the tree? Wink. Wink.

In case my Christmas wish doesn't come true, I'll just have to settle for these "donut holes," which are made in a mini muffin pan and then rolled in cinnamon and sugar. The kids loved them. I loved them. We were all quite happy! 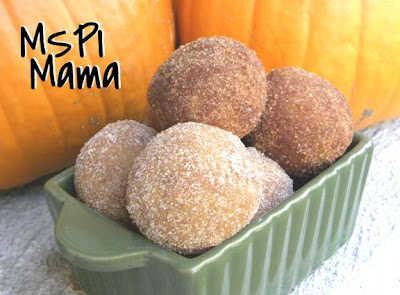 In a medium bowl, whisk together flour, baking powder, salt and spices (through cloves). In a separate, large bowl whisk together oil, brown sugar, egg, vanilla, pumpkin and rice milk until smooth. Add dry ingredients to wet ingredients and mix until just combined.

Spoon 1 tablespoon of batter into each muffin cup. Bake at 350 degrees for 10 minutes or until a toothpick comes out clean.

While the donuts bake, melt margarine in one bowl and combine granulated sugar and cinnamon in another bowl or a large Ziploc-style bag. Remove donuts from oven and cool for 2 minutes, or until just cool enough to handle. Dip the cooled donuts in melted margarine, then roll in cinnamon sugar or shake in bag to coat.
Repeat steps with remaining batter. Add extra cinnamon sugar as needed. Recipe makes approximately 4 dozen donut holes.
Tip: I ran out of cinnamon, so the donut holes in the top of the photo are coated in cinnamon sugar, while the ones on the bottom are coated in sugar. Both are equally delicious!

Email ThisBlogThis!Share to TwitterShare to FacebookShare to Pinterest
Labels: Breads

These looks really yummy! I'm so happy to have so many ideas at my fingertips. My son was diagnosed with MSPI and I ended up having to stop nursing him after clearing my system for three weeks didn't work. I'm pregnant with my second baby due in February, so I'm starting to do the MSPI diet now. I like how you posted a link to the doughnut pan on Amazon! Now your hubby can't miss it! :)

Oh, trust me, Rachel. If anyone can miss it, my hubby can. The only way I'm getting this for Christmas is if I buy it, wrap it and put it under the tree myself! Hmmmm, that sounds like a good idea! ;)

Could you use almond milk instead of the rice milk?

Millie, I don't see why not!

I made these a couple weeks ago and they were soooo yummy!!! Thanks!!!

I just made these for a super yummy Thanksgiving breakfast. I've also cut out egg so I replaced the egg with 1/2 a ripe banana and they turned out perfectly. Thanks for this great recipe!

I made these and they were delicious. The only think that I didn't do was put them in the butter before the sugar. Right out of the oven they were hot enough for the sugar to stick.