So here's a very important question: Coke or Pepsi? For me, Coke wins it hands-down. I love good ol' Coca-Cola. Pepsi doesn't do it for me. And none of that diet junk. If I'm going to drink a pop (and yes, it's pop, not soda!) I'm going to drink the real thing. And it's because I won't drink the diet stuff that I've pretty much stopped drinking pop and only drink it occasionally. Too many calories that I don't need! However, I still love the stuff!

Just because I no longer drink pop doesn't mean I have to completely strip it from my life, so here's a great recipe that utilizes Coke ... and I suppose you could use Pepsi, but why would you? Now, don't get freaked out about the whole pop-flavored-meat-thing. The cola flavor mellows during the cooking process. The flavor is savory and delicious, and people will be asking you, "What's in this? Whatever it is, it tastes great!"

Everything cooks in the slow cooker, which makes it super easy. And if you have leftovers, the meat is great for tacos. Just reheat the shredded beef in a saucepan on the stove with a little bit of water and some taco seasonings. Delish! 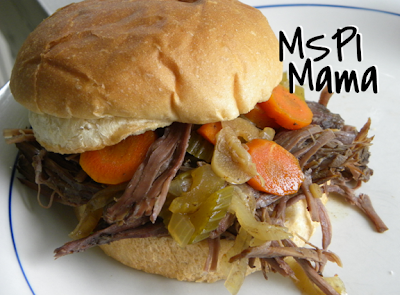 Spray your slow cooker with non-stick cooking spray. Add in the sliced vegetables, then the beef. Mix together the remaining ingredients (except the buns) in a bowl and pour over the meat and veggies. Cook on low for 6-8 hours or on high for 3-4 hours.

When the meat is ready, remove from the pot with tongs and place on a cutting board. Strain the juices from the vegetables and set aside. Slice or shred the beef (whichever is your preference) and add some juices if needed.

Layer the beef and then the vegetables on the buns, ladling some of the extra juices on top as needed or serve on the side for dipping.

Tip: If your family doesn't care for spicy food, use the red pepper flakes and cayenne sparingly. The heat intensifies during the cooking process!

Freezer-Friendly: Freeze leftovers in a freezer-safe package. Completely thaw the package in the refrigerator for several hours prior to reheating in a pan on the stove or in the microwave. The vegetables will turn to mush if you don't completely thaw!

What about the caramel coloring in the cola? Doesn't that contain milk protein?

Although caramel coloring sounds like it should contain dairy, it rarely ever does. It's usually made from a carbohydrate source, such as corn syrup.

Every other recipe I find says to brown the roast in a skillet first. What does this do and how is yours different when you don't do it?

Browning will intensiy and deepen the meat flavor. However, the ultimate end result whether you brown or not will usually be about the same. I often skip it because I don't want to clean an extra pan. ;)

I just threw this in the crock pot! I used Pepsi because that's what I prefer (and therefore have in my household). I left out the worchestershire as I haven't found any MSPI friendly yet. I'm serving it with sweet potato fries; it sounded like a good combo. Can't wait to try it. Thanks for the recipe!