My two oldest kids had their birthdays last month (more on that in a later post) and since their birthdays are only five days apart, we always join their family celebrations together. Two-for-one party! So much easier on this mama!

I almost always end up serving some sort of sandwich or soup. This year was no exception. When I saw this recipe, I knew it would be perfect. I was able to cook everything two days before the event, store the meat in the fridge and then reheat the day of the party. Doesn't get much simpler than that.

Don't be scared away by the use of peppers in this recipe. The slow cooking really tames any heat, making the meat relatively mild but tangy.

This is completely optional, but to stretch the meat a little more, I sauteed a bunch of sliced onions and sweet peppers in olive oil. A great topping for the beef!

And, by the way, these sandwiches would be GREAT for a Super Bowl party, especially a Super Bowl in which the Packers are playing ... and preferably winning! 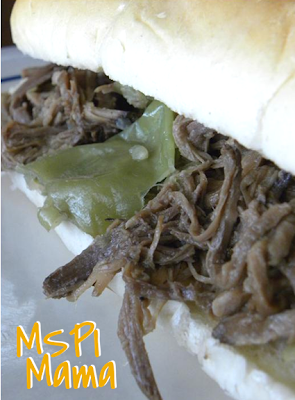 Place the roast in a 4- or 6-quart slow cooker. Pour the jar of peppers and juices over the roast. Cover the cooker with its lid and cook on low 8-10 hours. Remove meat from the cooker and allow it to cool to touch. Shred meat and return it to the cooker and mix with the juices and peppers. Serve on the buns.

Tip: If you decide to double the recipe -- this would freeze really well -- you can increase the amount of meat without needing to add more peppers. And speaking of peppers, while the meat is cooling for you to shred it, you might want to take a few minutes to remove the stems from the peppers. That'll make things a little easier on those eating the peppers.