Dairy-free chowder? Yes! There's no cow's milk, half-and-half or cream in my version of this Rachael Ray recipe. Granted, it's probably not quite as rich, but it's still mighty good!

Double the recipe and put the extra in the freezer. Just make sure you thaw the soup completely (preferably overnight in the refrigerator) before reheating, otherwise the potato will turn to mush. 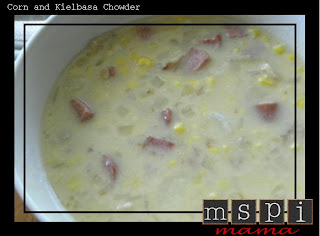 Heat a pot over medium-high heat. Add the kielbasa and cook, stirring, until lightly browned, about 6 minutes. Transfer to a plate.

Add the onions and oil to the pan and cook over medium heat, stirring occasionally, until golden, about 6 minutes. Add the broth and potato and bring to a boil. Reduce the heat, cover with a lid and simmer until the potato is tender, about 10 minutes. Add the rice milk and corn and cook, stirring, until heated through.

Using a blender or food processor, puree 1 cup chowder until smooth. Stir the puree back into the chowder along with the browned kielbasa and season to taste with salt and pepper.

What brand of Kielbasa do your use? Because the only one I know of (Hillshire Farms) has soy, and even says so on the label.

Yes, Hillshire Farm has soy in it. I used a local brand that I found at my store. It's been so long though, that I can't remember what it was called. Sorry!