When on this diet, I found myself often craving creamy foods, especially since traditional ice cream and yogurts were a big no-no. That's when my love affair with coconut milk began. It's such a versatile ingredient. It's fabulous in desserts and in savory dishes, such as this recipe that I kind of concocted, after being inspired by this H-E-B recipe. (It's also somewhat similar to the Curry Chicken recipe I posted nearly two years ago.)

I decided to throw in peas and garbanzo beans for color and extra protein, but you can use whatever veggies you have on hand. I think cauliflower and carrots would be fantastic. Just precook the veggies or adjust your cooking time. You could make this vegetarian easily by skipping the chicken. Just add more veggies and beans.

If you're interested in trying some other recipes with coconut milk, just do a search using the search engine on the right side of my blog. You won't be disappointed! 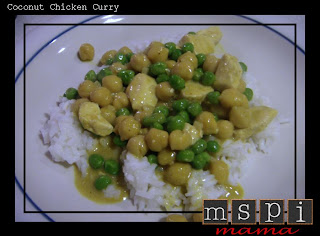 Season chicken with salt and pepper. Heat oil in a large skillet over medium heat. Cook chicken until done. Remove chicken to a plate and set aside.

Add onions to skillet and cook 10 minutes or until very soft. Stir in curry powder and cook 1 more minute. Stir coconut milk, peas and garbanzo beans into skillet with onions. Cook 2 to 3 minutes to warm peas and beans and to thicken and reduce the sauce slightly. Add chicken back into skillet.

Combine cornstarch with water and stir into skillet mixture to thicken. (The mixture will thicken faster if you bring it to a simmer.) Season with salt and pepper, to taste. Serve with rice.

Tip: I love curry, but if you're somewhat leery of this ingredient, then cut back on the spice and flavor to your taste.

Yummy!! We made this tonight, and it was AmAzInG! We made just as directed using garbanzo beans and peas. We served it with some naan bread we made. My husband said that he likes that our DD's MSPI is forcing us to branch out, and try wonderful meals like this! I highly recommend making this recipe.

My whole family of 6 loves this!