We went to visit my parents in Kansas last weekend. While the rest of us were pigging out on ice cream, my mom made this old-fashioned dessert just for JD, and he couldn't get enough of it.

This is the perfect first dessert for an MSPI baby. It's super simple to make. I didn't indicate any measurements because you can make it as big or as little as you want. I like to use a loaf pan.

Be generous with the apple sauce! It soaks into the graham crackers and creates a soft texture. 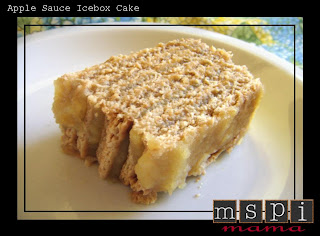 Cover and place pan in refrigerator for several hours.

This looks yummy and like something I might like, too! I've been reading your blog for the past 5 months as I have a little boy here in Omaha with MSPI symptoms. We're back to soy and have started solids but dairy will have to wait! Thank you so much for doing this site!

So glad you like the site, mama brehm! Congrats on the soy! One step at a time ...

Curious . . . are there graham crackers without soy? I haven't found any. Maybe this was when your son was able to have soy but not dairy. Let me know if you've found some soy-free graham crackers!

If you're avoiding soy oil/lecithin, then yes, you're going to have a hard time finding graham crackers. If soy oil/lecithin are OK, then there are several brands that I've used, including Keebler and Honey Maid. Hope that helps!

I'm not sure if this has been answered in another comments section, but I was able to find MSPI safe graham crackers-- They are Back to Nature brand. My little one loves them!!